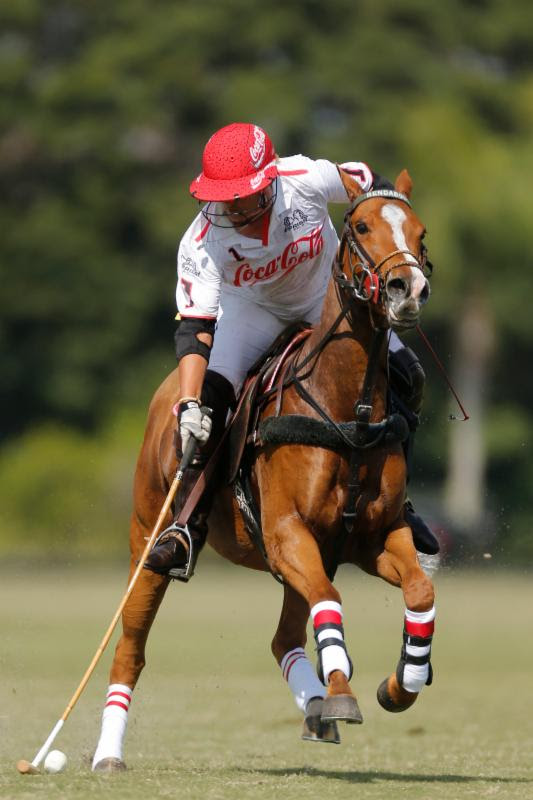 On the heels of strong opening games in the tournament for both Coca-Cola and Horseware, the team in red continued their tight performance style. They started off making up the two-goal deficit from handicap with goals from Julian de Lusarreta and Del Walton. After another from Walton, Coca-Cola held a 3-2 lead early in the third chukker. That created some trouble for 18-goal team Horseware, who now had to play Coca-Cola on even keel the rest of the way.

Having made eight goals in his opening game, Juan Martín Obregon provided two more for Horseware in the second and third chukkers. His efforts helped keep his team close against a tough Coca-Cola roster that was using a complete team effort. Coca-Cola patrona Gillian Johnston, in her trademark style, broke out and added back-to-back goals before the end of the half to take her team into halftime tied at 5.

Horseware continued to hang in against a tough opponent, but Johnston had quite the day, finishing off two more runs for a team leading four goals on the day. With Johnston scoring up front for her team, Horseware continued to persevere and stay in the game. Obregon converted two goals from the penalty line in the fourth and fifth chukkers to go into the final chukker tied at 8.
However, Horseware began to get into foul trouble, committing five fouls in the sixth. That allowed Coca-Cola’s Julio Arellano to score two goals from the penalty line. Another field goal put Coca-Cola up by two, and they didn’t look back as they defeated a tough Horseware team 11-9. 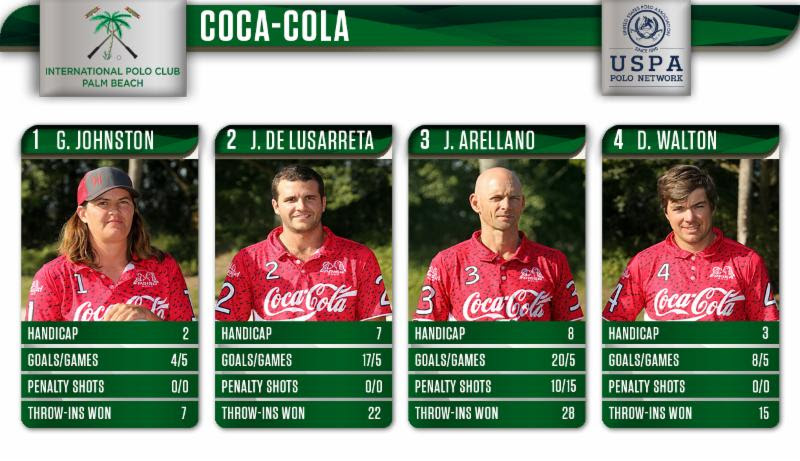 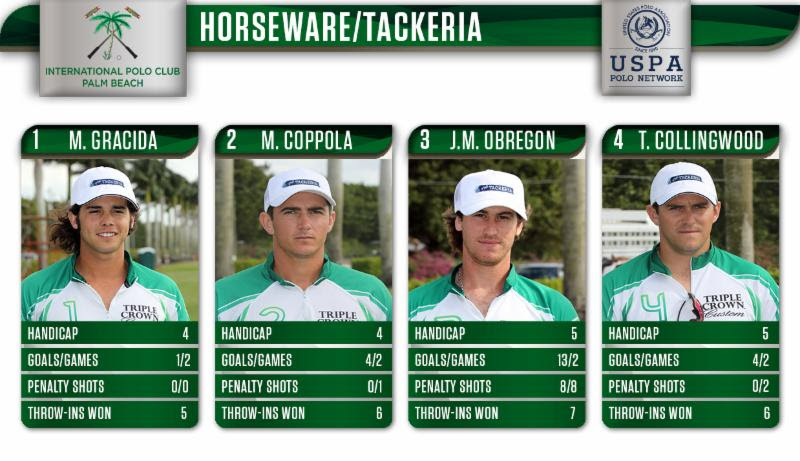 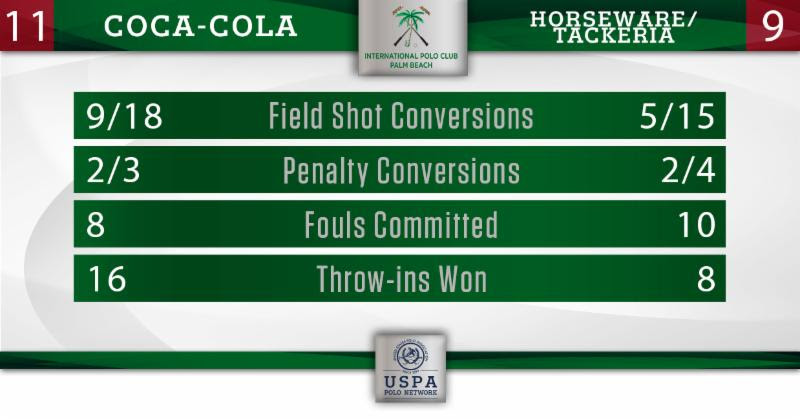 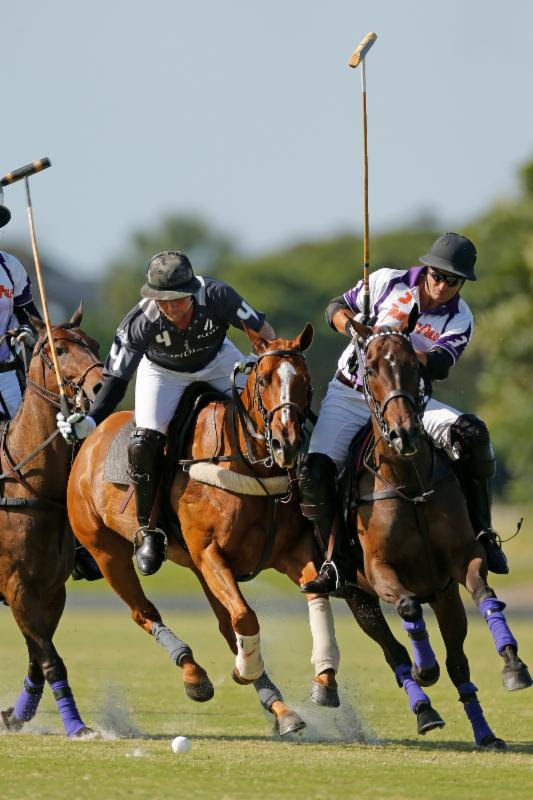 
Travieso tried to bounce back from their opening game performance and put pressure on a La Indiana team that was also looking for their first win of the Ylvisaker Cup. Six fouls committed in the first chukker by La Indiana provided Travieso with multiple chances to take a large lead. But Travieso could only convert 1 of 4 penalty chances to take a 2-0 lead after the first chukker, which could have been way worse for the La Indiana team. With all of the fouls, La Indiana was having a tough time creating scoring chances, but they began to put their opponents in foul trouble in the second and third chukkers. Seven total fouls by Travieso led to four penalty goals for La Indiana by halftime, and La Indiana was fortunate to escape halftime tied at 5.

Foul trouble resulting in penalty shots ultimately determined the game. La Indiana behind Mike Azzaro and Jeff Hall went a perfect 9-for-9 from the penalty line, while Travieso only shot 5 of 11 from the penalty line. Neither team was particularly efficient from the field. La Indiana’s ability to convert their penalties gave them the edge throughout the second half. They had a three-goal lead going into the final chukker and held on for the 11-9 victory. 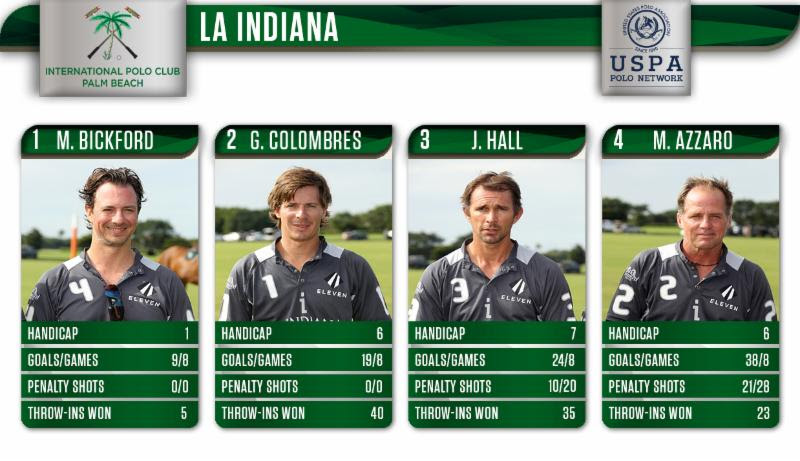 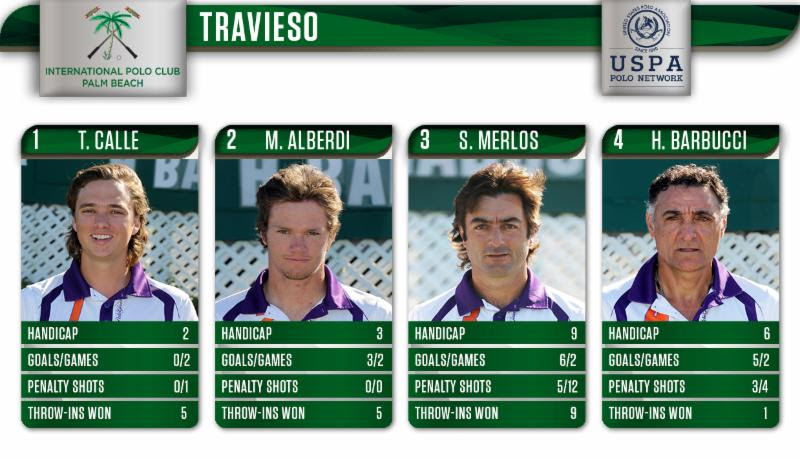 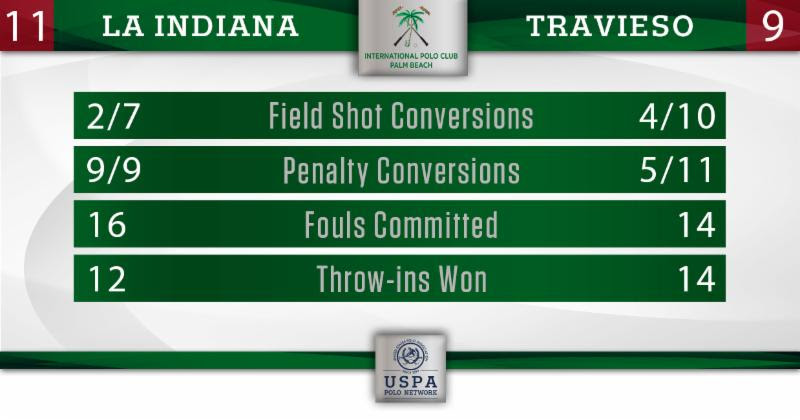 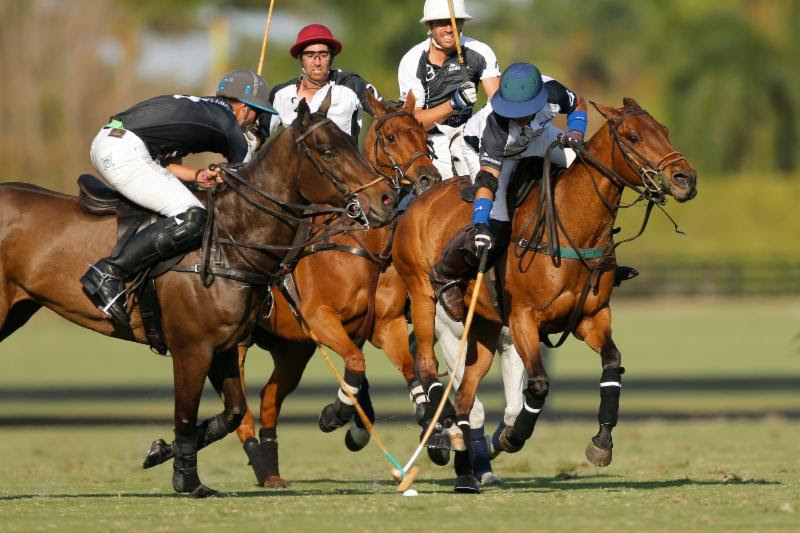 
Raised to 10 goals for the 2017 season, Hilario Ulloa showed just why he deserved that rating as he led his Villa del Lago Modere team all day with an impressive performance that Equine Liquid Biocell couldn’t find an answer for. The problems began when Equine Liquid Biocell got into foul trouble early, committing eight fouls in the first chukker. That put Ulloa on the penalty line five times. He converted four of them, giving Villa del Lago Modere an early 4-1 lead and sliding Ulloa into his groove for the game. Another goal from the field and one from the penalty line gave Ulloa six goals at halftime. Jared Zenni put four goals through the goal before halftime to keep his team close, trailing by a single goal heading into the second half.

However, continuing to put Ulloa on the penalty line became a problem as Ulloa converted 8 of his 10 penalty attempts along with three goals from the field to score all 11 goals for Villa del Lago team. In contrast, Equine Liquid Biocell had all four players find the score sheet for the game. With Villa del Lago Modere committing only two fouls in the second half, they never allowed their opponents to get easy goals. Effective team defense, along with the amazing performance from Ulloa, resulted in Villa del Lago Modere winning 11-9 to improve their Ylvisaker record to 1-1. 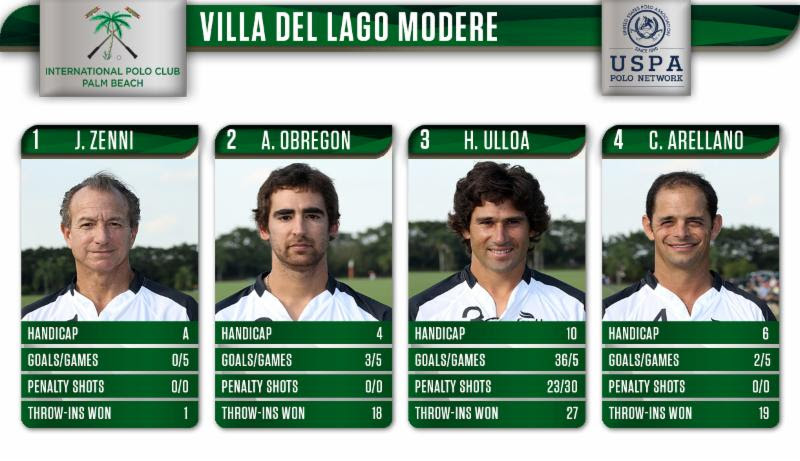 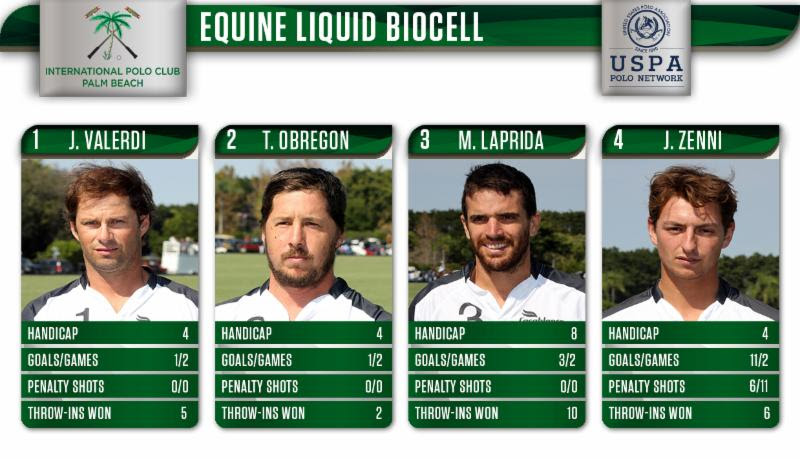 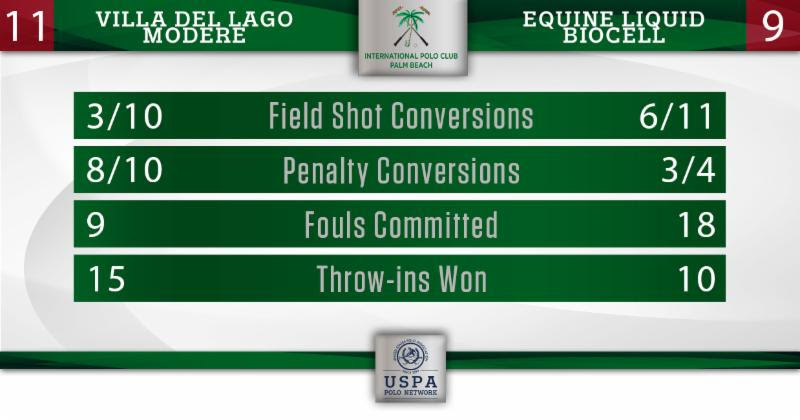 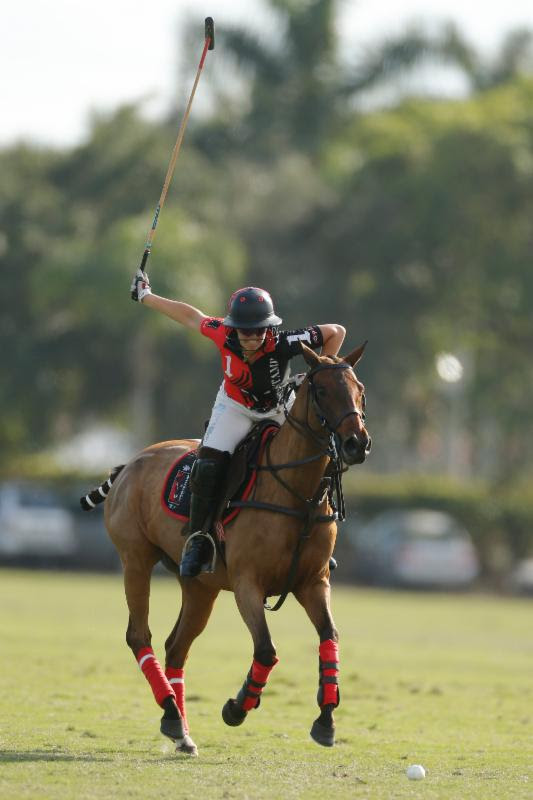 Annabelle Gundlach
The other 3 p.m. game was a very close contest throughout. The score was tied after the first chukker, with Costi Caset and Sapo Caset scoring for Tonkawa while Postage Stamp Farm responded with goals from Juan Chavanne and Mariano Aguerre. The game stayed close heading into halftime, with Tonkawa taking a slim lead (5-4), but foul trouble started to become in issue in the second half as Kris Kampsen began to make penalty shots. Heading into the final chukker tied, Postage Stamp took over with a penalty goal from Kampsen (his sixth goal of the game). Three more goals from the field saw Postage Stamp a finish with a 12-8 victory over a tough Tonkawa team to go to 2-0 in the Ylvisaker Cup.
The tournament continues Sunday with three games at IPC. The 3 p.m. featured match pits Orchard Hill against Valiente II on Engel & & Völkers field at the stadium. Mt. Brilliant plays Goose Creek at 10 a.m., and Grand Champions/Casablanca opposes Valiente I at noon (fields TBA).

All games in the Ylvisaker Cup are being live streamed on the USPA Polo Network: uspolo.org. 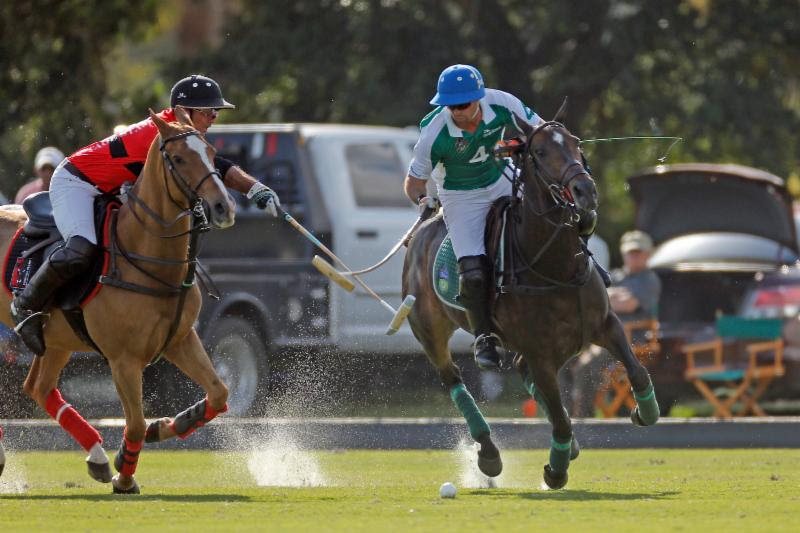