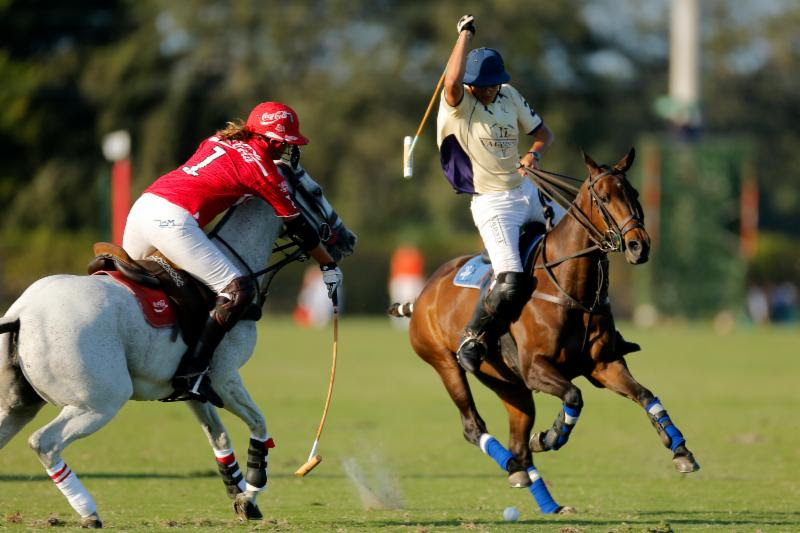 Gillian Johnston and Jaoquin Panelo
All photos by David Lominska/Polographics.com

Wellington, Fla. – Feb. 13, 2017 – Coca-Cola snatched a stunning 16-11 victory over Valiente II in Sunday’s featured match on Engel & Volkers field at the International Polo Club Palm Beach (IPC), concluding the quarterfinals in the 2017 Ylvisaker Cup. Earlier in the day Postage Stamp Farm squeezed by Villa del Lago Modere 10-9, and Orchard Hill bested Horseware 15-10.It was a stellar day for the team in red, who brought home a slew of awards along with a spot in the semifinals. Patrona Gillian Johnston, who repeatedly ran the ball into goal like a dervish, was named MVP. “Fanta,” played by Coca-Cola’s Julian de Lusarreta and owned by Johnston’s G-String Polo Ponies, was Best-Playing Pony.

Coca-Cola got off to an early 2-0 lead on goals from de Lusarreta and Wesley Finlayson, who played in place of Del Walton. Valiente II answered with a goal from Robert Jornayvaz, back in the line-up after missing the previous two games. That was a boon to Valiente II, who always plays in better sync with Jornayvaz at the helm.After close back-and-forth play through two chukkers, the game took a twist in the third. Valiente II seemed to stun Coca-Cola, scoring five goals on five shot attempts from the field. Diego Cavanagh and Matias Torres Zavaleta each scored twice, and Joaquin Panelo added another goal. That allowed Valiente II to control play the last half of the third chukker and take an 8-5 lead into halftime.

Coca-Cola promptly recovered from their tough third chukker and bounced back in the fourth. Powerhouse Julio Arellano scored two goals from the penalty line, and Johnston made one of her three goals on the day. However, fouls from Coca-Cola allowed Cavanagh to convert two penalty shots and help Valiente II maintain their lead. As the second half unfolded, Coca-Cola kept winning throw-ins for possession (at one point winning 8 of 11), and they began to dominate in the second half.Arellano converted three more penalty shots the rest of the game, going a perfect 5-for-5 on the day. Valiente II was unable to register a single shot at goal in the second half as Coca-Cola controlled play. A balanced attack saw all Coca-Cola players score at least three goals, Arellano leading the way with seven. The victors slammed in an amazing 11 goals in the second half to run away with the game and finish with a 16-11 victory. 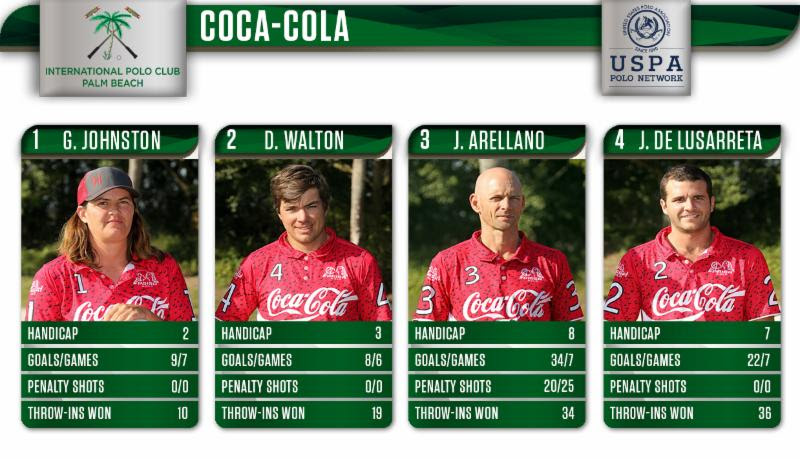 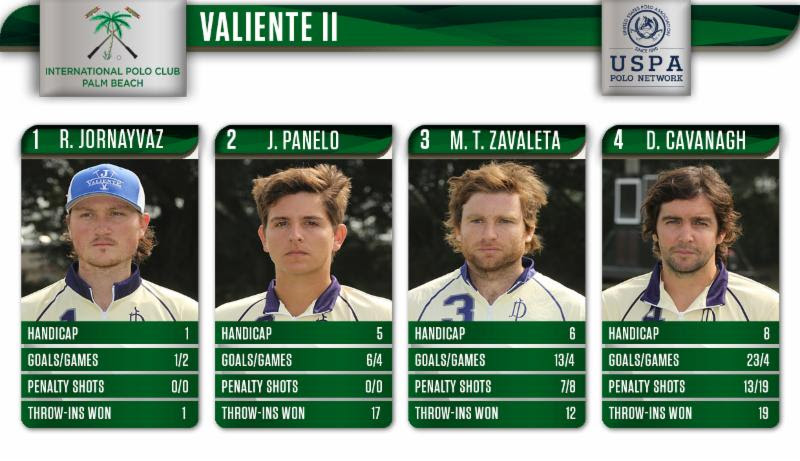 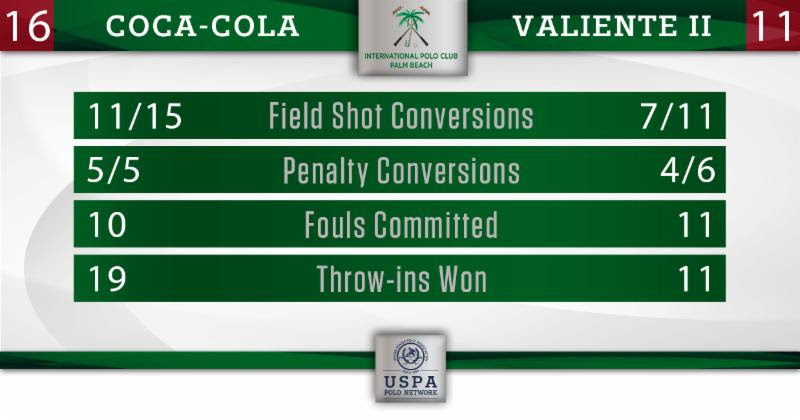 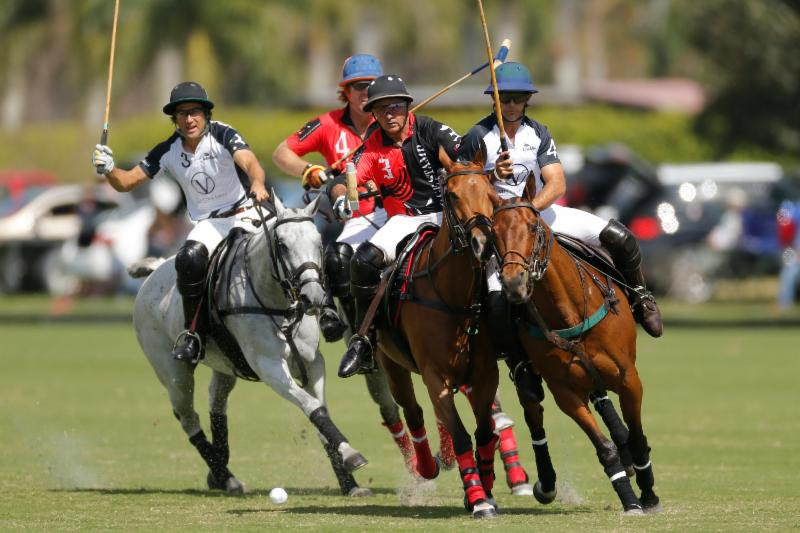 The match between Villa del Lago Modere and Postage Stamp Farm pitted the two leading scorers in the tournament, Hilario Ulloa and Kris Kampsen, against each other. As both are forces of nature from the penalty line, the mantra of the match was “Don’t foul, don’t foul, don’t foul.”After an even first chukker with each team scoring one goal, the foul factor kicked in. Villa del Lago Modere’s efforts to control play handed Kampsen three penalty attempts, all of which he converted. Ulloa answered with one goal from the penalty line and another from the field.Then the game took a twist. Both teams’ patrons, Annabelle Gundlach (Postage Stamp) and Jim Zenni (Villa del Lago Modere) were subbed out with injuries. That was a big disappointment for Gundlach, a dynamo who has propelled her team through an astounding first season in high-goal play at IPC. The replacements (Tim Dutta for Gundlach and Harrison Azzaro for Zenni) stepped into their first high-goal action of the season.With a 1-goal lead into the third chukker, Postage Stamp added two more penalty goals from Kampsen and a field goal from Jota Chavanne to take a 7-4 lead into halftime. Postage Stamp really began to control play. They put six shots on goal, bringing their total attempts at that point to 16, while Villa del Lago Modere had only managed six. The result was two more goals (one each from Mariano Aguerre and Kampsen) as Postage Stamp extended their lead to 9-4.The game looked to be running away from Villa del Lago Modere. After making up one goal in the fifth, they needed a big sixth chukker. Holding Postage Stamp to zero goals allowed Villa del Lago Modere to get back in the game, which became an easier task when Kampsen was subbed out with an injury. A goal from Agustin Obregon and two more from Ulloa brought Villa del Lago Modere within a single goal, but it was too late as Postage Stamp held on for the 10-9 victory. 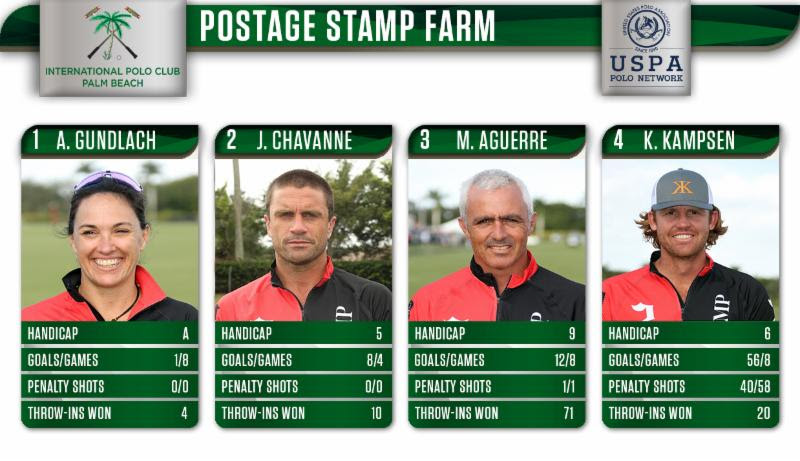 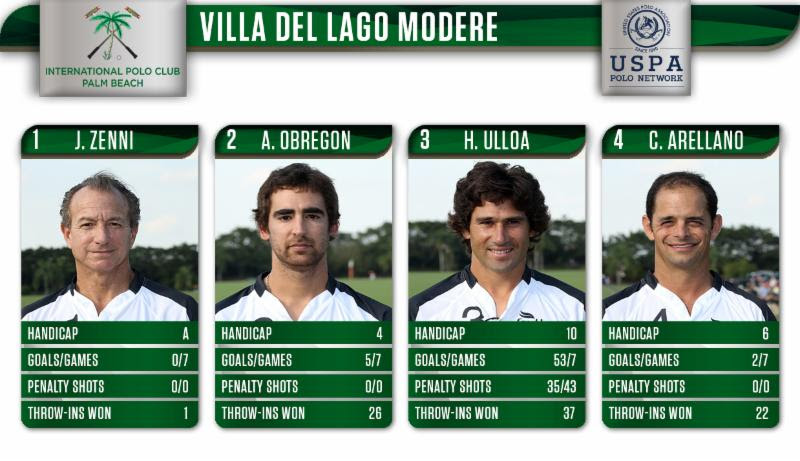 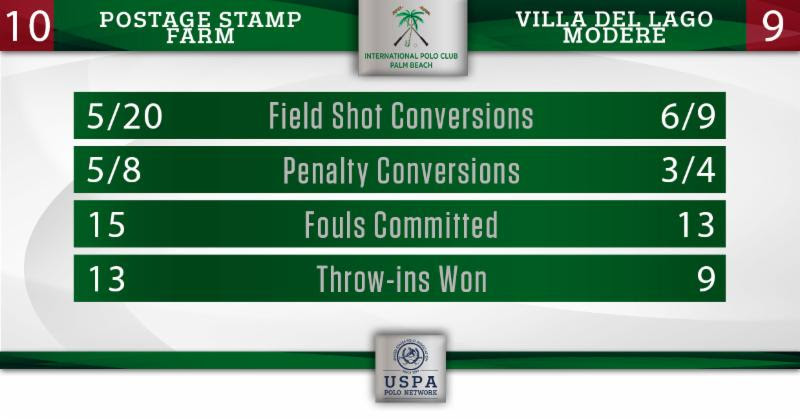 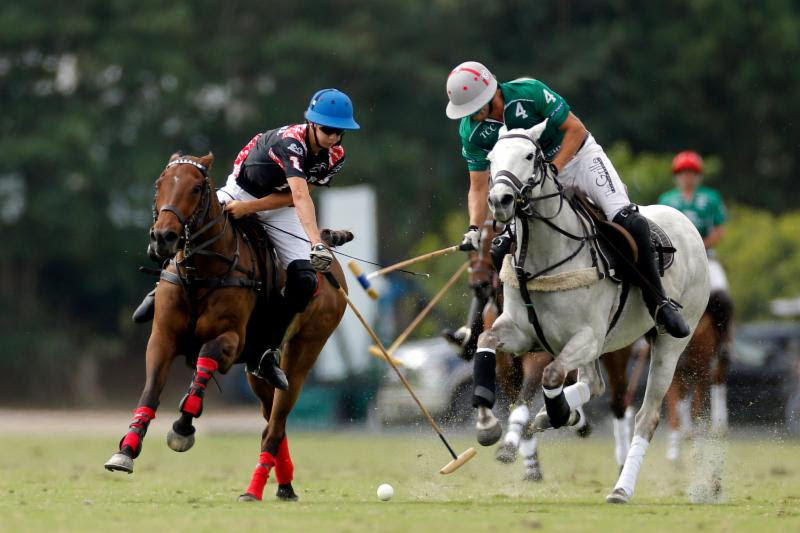 Facundo Pieres led the Orchard Hill stampede past a revamped Horseware roster that had 7-goaler Santi Torres replacing 5-goaler Tommy Collingwood. The shift obviated the 2-goal advantage that Horseware had been receiving on handicap. Torres moved to the No. 2 position, which pushed Mariano Gracida back to the No. 4, a spot he hasn’t played all year.Orchard Hill opened the scoring on a converted penalty 2 by Pieres. Dulio Diaz followed up with a run through the posts, scoring his first goal of the season and helping Orchard Hill take an early 2-0 lead. A tap-in goal by Lucas Criado from a Pieres pass pushed Orchard Hill lead even further and gave Horseware team an early deficit. Juan Martín Obregon, the leading scorer for Horseware throughout the Ylvisaker Cup, got his team on the board but was quickly answered by another goal from Pieres. That gave Orchard Hill a 4-1 lead after the first chukker.

Orchard Hill extended their lead further as five Horseware fouls in the second chukker resulted in four penalty attempts for Pieres. Not surprisingly, he converted all four chances. Orchard Hill opened up a big 9-2 lead. They rolled into halftime with a 10-3 lead over a Horseware team that couldn’t quite figure out how to stop Pieres.

Two more penalty goals by Pieres in the fourth chukker—bringing him to a perfect 7-for-7 from the penalty line—allowed Orchard Hill to keep their lead throughout the second half. By then Horseware had dug too deep a hole to make a comeback. Nonetheless, Horseware didn’t stop fighting. They scored four goals in the sixth chukker, with Obregon converting all three penalty attempts to bring his goal total to 8 on the day. But Pieres stayed on his A-game, scoring 10 goals on the day, with teammates Lucas Criado and Nico Escobar each adding two goals. Diaz contributed another to help Orchard Hill take the 15-10 victory and advance to the semifinals.

The semfinals take place Wednesday, February 15, at IPC. Coca-Cola plays Orchard Hill at noon, followed by Tonkawa vs. Postage Stamp at 3 p.m.All games in the Ylvisaker Cup are being live streamed on the USPA Polo Network: uspolo.org 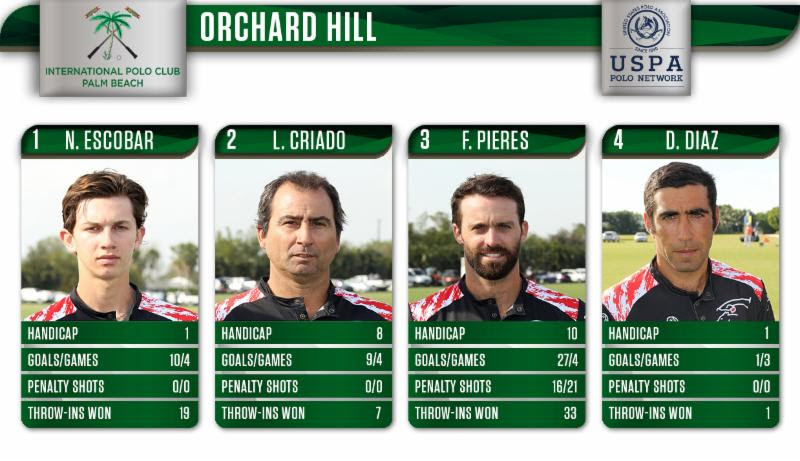 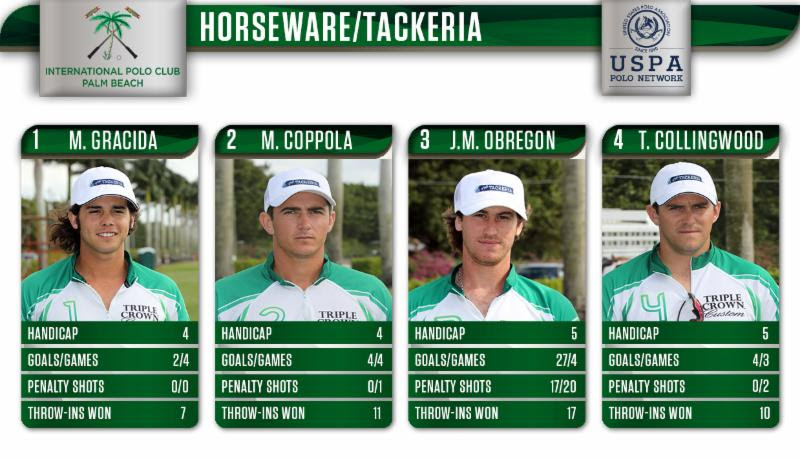 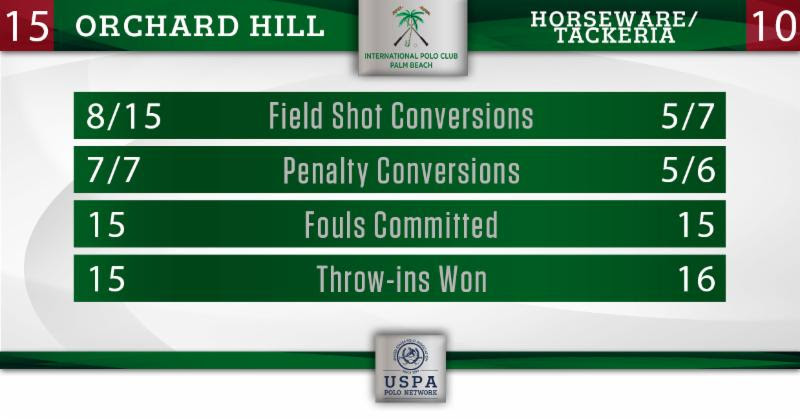