Wellington, Fla. – Jan. 22, 2017 – Mark Bellissimo and the International Polo Club (IPC) announced today the formation of an exhilarating sports initiative, highlighting the tenacity and speed of polo in an engaging and spectator-fueled atmosphere at the Equestrian Village (EV) of Palm Beach International Equestrian Center (PBIEC) centrally located at the corner of Pierson and South Shore Blvd. The Gladiator Polo inaugural arena polo event, sanctioned by the United States Polo Association (USPA), is set to take place on Thursday, January 26, with gates opening at 6 p.m. Free general admission for spectators will include a number of family-friendly activities including chariot racing, gladiator jousting, spectator skill challenges as well as Wellington’s favorite band Wonderama. An authentic Argentinian Asado (BBQ) will be available for a fee of $30 per person and can be reserved online at http://bit.ly/2jOWRVG. It will be hosted at the VIP pavilion overlooking the arena. 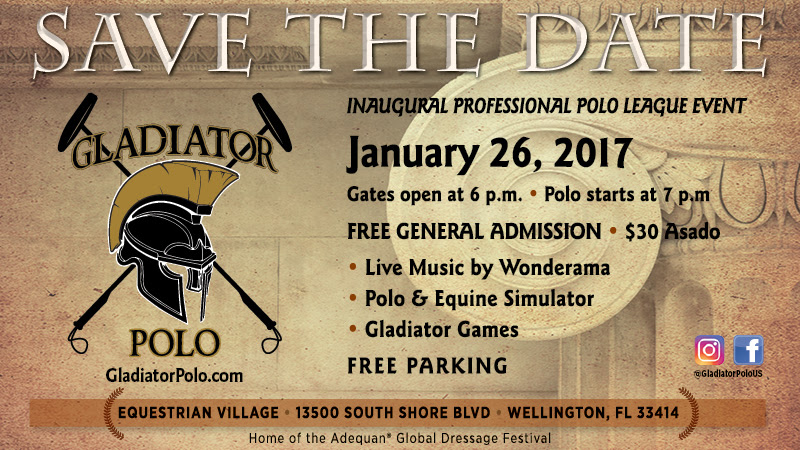 Arena polo is a fast-paced version of polo played outdoors in an enclosed all-weather arena.  Unlike outdoor polo, which is played on a 10-acre field, arena polo is played on 300-by-150-foot field, enclosed by walls of four or more feet in height. A polo ball is similar to a mini soccer ball and is larger than the hard plastic ball used outdoors. Arena polo is typically far more financially accessible than outdoor polo and a great entry point for new and young players. Unlike grass polo which is 4 players per team, Arena Polo utilizes 3 players per team.

The inaugural Gladiator Polo Arena League (GPAL) will have four teams, all named after the top Roman Gladiators: Spartacus, Crixus, Priscus, and Spiculus. The Inaugural game will be between two teams, Crixus and Spartacus. Each of those teams are ranked 25 goals, making this one of the highest-ranked Arena Polo matches in history, and certainly in the last 25 years.

The Spartacus team, sponsored by Carol Sollak and Engel & Völkers, will feature players Tommy Biddle (10 goals), Kris Kampsen (8) and Santi Torres (7). Contributing sponsors for the Spartacus team are Goose Island Beer, W Development Group, Palm Beach Equine Clinic, and Cavalleria Toscana.  Spartacus will face the Crixus team, Richard Schechter and the Bainbridge Companies, with players Matias Magrini (9 goals), Mike Azzaro (9) and Felipe Viana (7).  Contributing sponsors for Team Spartacus are Shock Top Beer, Equisport Division of Marshall & Sterling Insurance, Pegasus Builders, and the Maya Group at Illustrated Properties. Richard Schechter, CEO of the Bainbridge Companies, one of the Winter Equestrian Festival’s (WEF) longest-running sponsors, was the first to step up to sponsor the event. Schechter commented, “Wellington’s equestrian lifestyle is unique in the World. I am always supportive of innovative ways to strengthen Wellington and enhance that experience.” Carol Sollak, a top WEF and Polo sponsor, added, “We need to find ways to bring horse sport to a broader audience, I wanted to make sure we support that effort.”

The International Polo Club, in collaboration with the Palm Beach Riding Academy will be launching the IPC Polo School initiative on Thursday which will identify and train the next generation of polo players for all skill levels. Each of the Gladiators, Kris Kampsen, Mike Azzaro, Matias Magrini, Tommy Biddle, Felipe Viana, and Santi Torres will donate a one-hour lesson to a lucky child/young adult in attendance at the Thursday night event in order to help launch their “polo career.” Each of the six lucky riders will receive a gift bag as well as receiving a Gladiator Jersey from their gladiator team.

The Gladiator Polo night will also introduce two of the world’s most advanced riding simulators. One simulator teaches general riding skills, and the other trainer teaches polo riding and “stick and ball” training. Each simulator will be based at the Equestrian Village site for the season.

“We wanted to create a concept that will re-energize polo in this country and ultimately bring new participants, spectators, and sponsors into the sport,” said Mark Bellissimo, CEO of International Polo Club as well as Managing Partner of Wellington Equestrian Partners (WEP) that owns Palm Beach International Equestrian Center (PBIEC) and Global Dressage Festival (GDF). “We’re going to kick off this 2017 Gladiator Polo Arena League by taking the best athletes in arena polo and entering them in a tournament with richest prize money in history with a $100,000 tournament purse over three Thursday evenings. The first two matches will be played for $30,000 and the final will be $40,000. We believe the exposure and benefit that this opportunity provides to the sport of polo and its players is something we can really develop in the coming years. If the athletes create an exciting event and the sport connects with spectators and sponsors, I expect the sponsored purses to grow significantly over the years.”

“This is incredibly exciting news for our sport. High-goal arena polo is faster paced than its outdoor counterpart due to the smaller size of the playing field and the added element the side boards bring to the gams,” Said Bob Puetz, Executive Director of the USPA and former high-goal arena player. “We haven’t seen an organized high-goal arena polo league since LA’s 1980’s Pro Polo. Spectators will be more engaged in the game and feel the intensity of the players from a new perspective.” The match will be composed of six 5-minute chukkers, offering audiences an up close and personal arena polo experience. There will be entertainment, fan experiences, and music between each chukker.

As the popularity of the event grows, Bellissimo is confident that there is a sustainable longevity for arena polo in Wellington, and it will have a home each Thursday evening during the winter starting in 2018. For many years Wellington has served as the winter hub for equestrians around the world, and the addition of arena polo will provide world-class equestrian sport from Thursday to Sunday during the high season. Adding to an already strong weekly schedule featuring the “Friday Night Stars” FEI Grand Prix Dressage Freestyle at The Stadium on Friday evenings, “Saturday Night Lights” Grand Prix Show Jumping competitions at PBIEC on Saturday nights, and concluding with high-goal polo at the International Polo Club (IPC) on Sunday afternoons, Gladiator Polo will entertain audiences and begin the equestrian weekend on Thursday with action-packed family fun!

Bellissimo and IPC would like to thank the 12 inaugural sponsors critical to launching the Gladiator Polo Arena League. They are Richard Schechter of Bainbridge, Carol Sollak of Engel & Völkers, Tom MacGuinness of Horseware, Rodolfo Maya from the Maya Group, Scott Swerdlin from Palm Beach Equine, Mike Davis of Cavalleria Toscana, Lamaro Watson of W Development Group, Dave Forkey of Pegasus Builders, Donald Graves from Equisport, and Shock Top and Goose Island from Anheuser Busch. Special thanks to Polo Patrons Michael Bickford (Mike Azzaro), and Annabelle Gundlach (Kris Kampsen) for allowing their players to participate in the event.

The USPA Polo Network will livestream the event at www.uspolo.org