The highly anticipated matchup between Orchard Hill and Valiente I saw Facundo Pieres and Adolfo Cambiaso face off for the first time since the 2016 Argentine Open final. Both were on laser focus and extremely well mounted, leaving stunned opponents in the dust. Pieres was particularly on fire and engaged in several ride-offs with Cambiaso.

The game started in a tight, congested manner, with both teams playing tough defense. Neither was able to break away for offensive chances. That resulted in five fouls in the opening chukker, with Cambiaso converting a penalty 2 and Pieres missing his one penalty 4 attempt. However, after a few early fouls, Orchard Hill created some scoring chances courtesy of 1-goaler Nico Escobar. He pushed forward, getting in behind the Valiente defense and scoring two goals on nice passes from Lucas Criado and Facundo Pieres. Orchard Hill held a 2-1 lead after the first chukker.

The determined Orchard Hill defense was the headliner of the day, keeping Cambiaso and his Valiente teammates in check. Orchard Hill only allowed their opponent to put three shots on goal during the entire first half, with Victorino Ruiz Jorba the only player to score from the field. After the first two goals from Escobar, Pieres began to take over. He slammed in the next five Orchard Hill goals, three from the penalty line and two from the field, giving his team an 8-4 lead at halftime.

The second half continued to display the ability of Orchard Hill to prevent Valiente from breaking away for runs, largely due to their dominance on throw-ins. At one point in the game, Orchard Hill won 11 of 13 throw-ins.

Adding to his five goals from the first half, Pieres put in three in the second half for eight goals on the day. Nico Escobar played in fantastic fashion, with four goals on the day and constantly pressuring the ball on defense. Cambiaso was never able to get going on the day. He missed to record a goal from the field, while converting two penalty shots before having teammate Felipe Viana convert the next three penalty attempts. 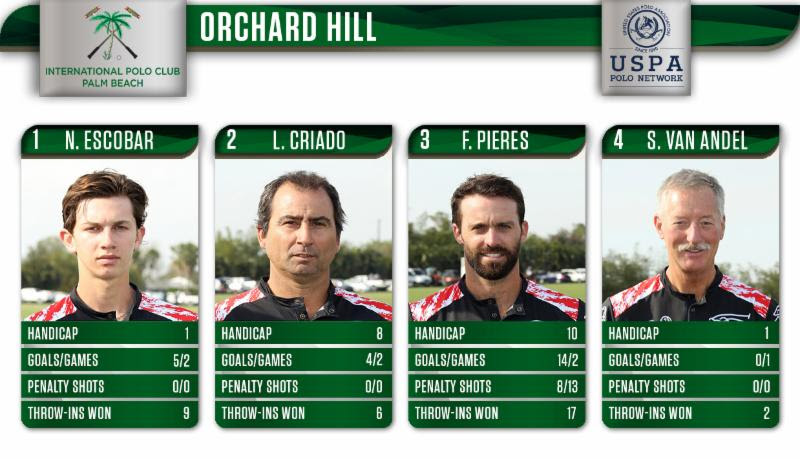 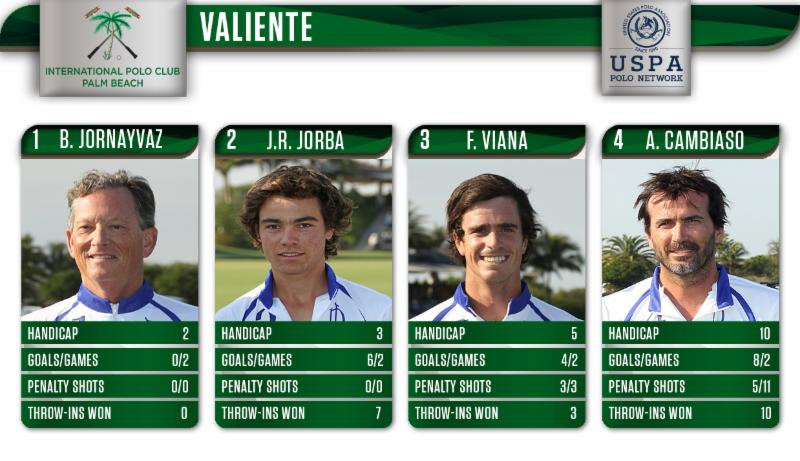 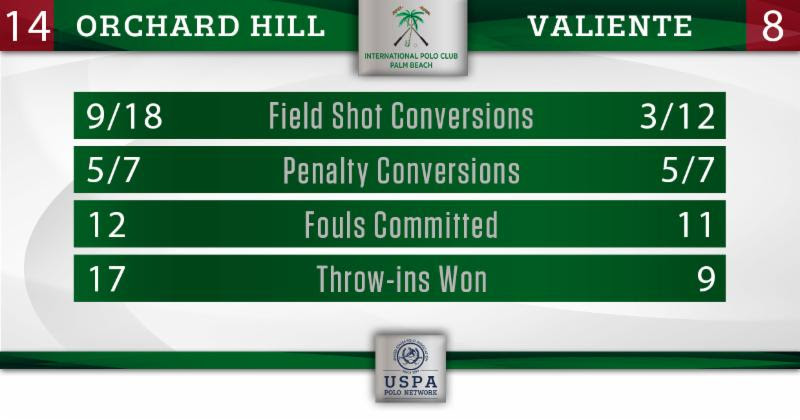 In a back-and-forth game, Mt. Brilliant and Valiente II played a very physical game that saw a combined 45 fouls and 7 yellow flags handed out, with three players having to sit out two minutes at various points in the game.

Mt. Brilliant got off to an early lead behind penalty shooting from Jason Crowder, who converted three shots in the opening chukker. Valiente II struggled early on, unable to put many shots at goal and continuing to foul and give up possession and potential scoring chances. However, just as in their first game, they turned things around in the second half. They scored three goals in the fourth chukker and two more in the fifth to trail by one goal heading into the sixth chukker.

Valiente II added two goals from Diego Cavanagh and Matias Torres Zavaleta early in the sixth to take a one-goal lead with time winding down. However, Julian Daniels scored for Mt. Brilliant to tie it up with only a few minutes remaining. Jason Crowder just missed a chance to win it, sending the game into overtime.

The game tightened up once again, and ultimately a foul was initially reversed but then challenged by Valiente II. That resulted in a penalty 2 goal for Zavaleta and the 11-10 overtime win for Valiente II to win their second game of the Ylvisaker Cup. 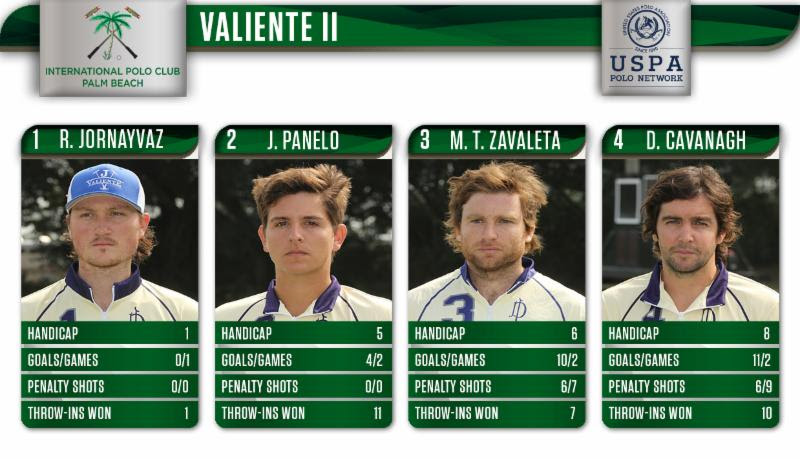 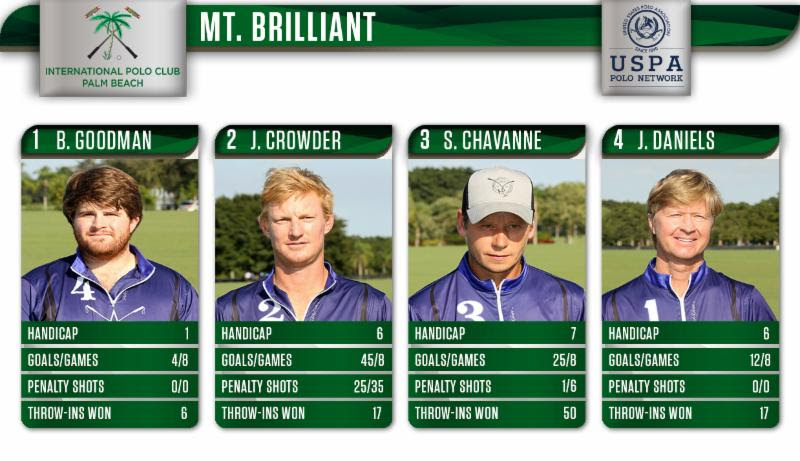 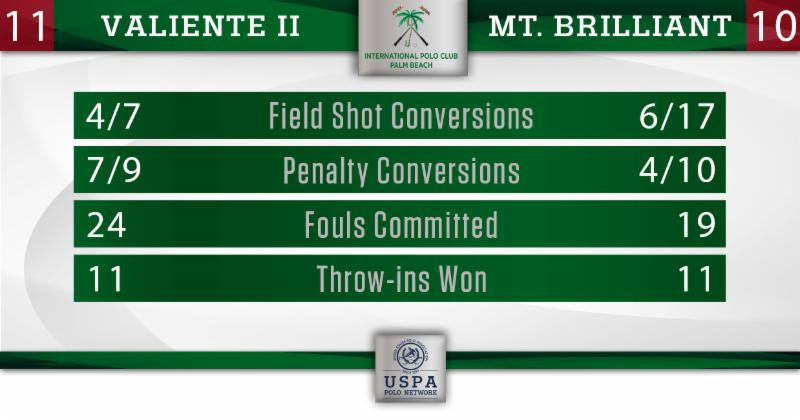 Just as happened in their first game, Grand Champions/ Casablanca came out firing. They got off to a 6-1 lead after two chukkers, with all four of their players scoring at least one goal. Meanwhile, Goose Creek was unable to generate many scoring chances, only shooting at goal once in the entire opening half. Luckily, Mariano Gonzalez continued his strong penalty shooting for the season, converting all three penalty attempts in the first half, but Grand Champions took an 8-3 lead into halftime.

The second half was a completely different story. Goose Creek came out strong with four goals in the fourth chukker and three more in the fifth. The father-son duo of Mariano and Peke Gonzalez scored all of the Goose Creek goals on the day, with seven and three goals respectively.

After battling all the way back to make it a close game, the combination of Nic Roldan and Juancito Bollini, who had his best game of the 2017 season so far, were too much. Roldan finished with six goals on the day (shooting 5 of 6 on his penalty shots), and Bollini had a total of four goals. Grand Champions hung on for a 12-10 victory.

The tournament continues Friday with four games at IPC. Travieso plays La Indiana at 10 a.m., followed by Coca Cola vs. Horseware at noon. There are two games at 3 p.m.: Villa del Lago Modere vs. Equine Liquid Biocell and Tonkawa vs. Postage Stamp Farm.

All games in the Ylvisaker Cup are being live streamed on the USPA Polo Network: uspolo.org. 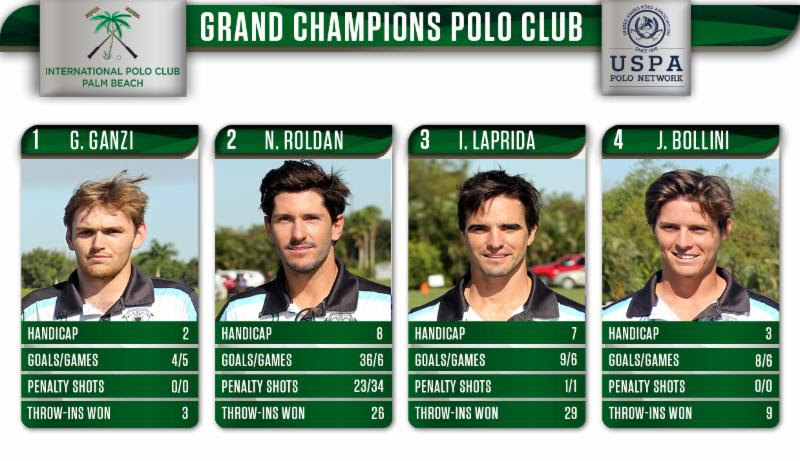 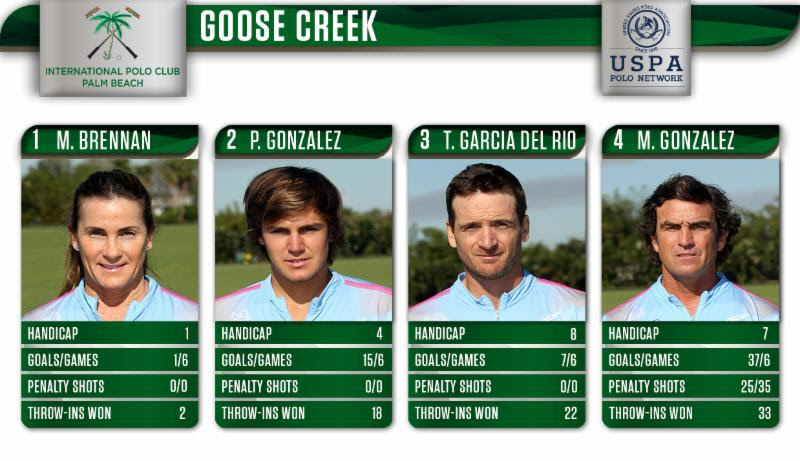 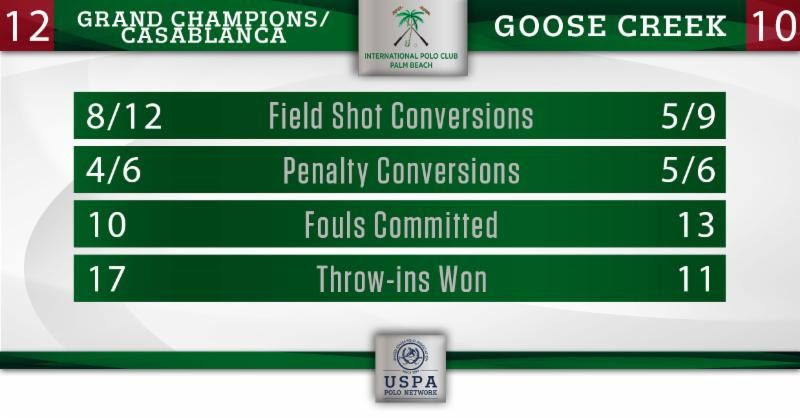