Wellington, Fla. – Jan. 12, 2017 – Tonkawa secured a spot in the semifinals with an 11-7 win Wednesday over Villa del Lago Modere in the Joe Barry Memorial at the International Polo Club Palm Beach. In another match, Mount Brilliant turned the tide on La Indiana, winning 10-14.

Tonkawa got off to a quick start, controlling open play and scoring 3 goals from the field in the first chukker, while Villa del Lago didn’t make any shots at goal. Tonkawa allowed their opponents to stay in the game early by committing 4 fouls, leading to 2 penalty goals by Hilario Ulloa. Foul trouble plagued Tonkawa again in the second chukker, but they avoided giving up any penalty goals. Villa del Lago tied the game at the close of the third to make the score a tense 3-3. The first half got a bit scrappy at times, with two yellow cards issued (1 per team).

Tonkawa came out firing after the half, winning 5 of 6 throw-ins and scoring 4 goals (2 field goals, 2 penalty goals) to Villa del Lago Modere’s 1. That gave Tonkawa a 3-goal lead that they wouldn’t give up the rest of the game. Villa del Lago Modere didn’t score at all from the field in the second half, only shooting at goal 9 times for the game. Tonkawa, meanwhile, displayed strong team defense with Sapo Caset and Facundo Obregon in the back, preventing 10-goaler Ulloa from breaking away. Nonetheless Ulloa was, as he so often is, game high-scorer, making all of his team’s 10 goals.

Tonkawa was efficient from the field, shooting 9/14 (64%) and 2/3 (67%) from the penalty line. After three games, Tonkawa now has three players who have made more than 10 goals. That makes them very difficult to stop as they head straight to the semifinals after securing first place in their bracket with the win. 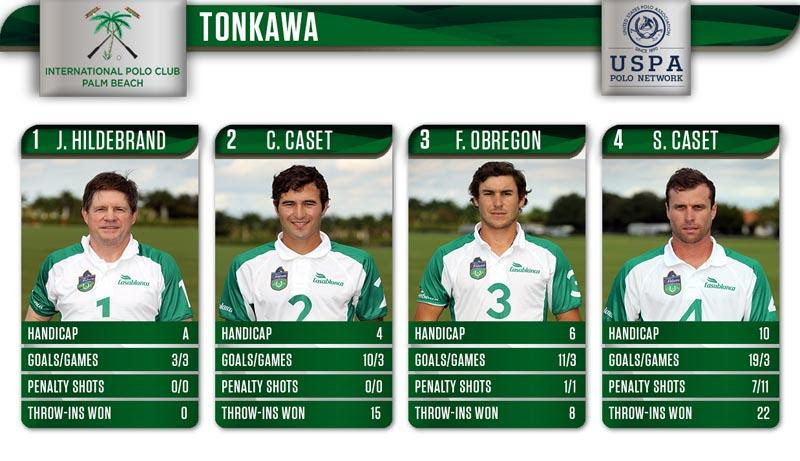 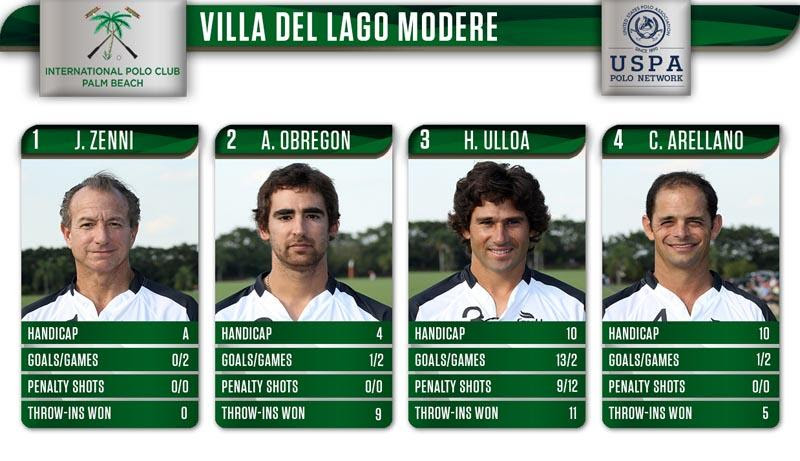 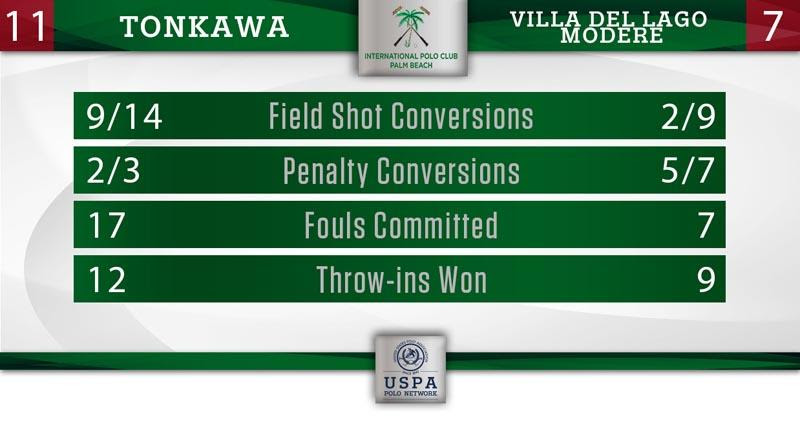 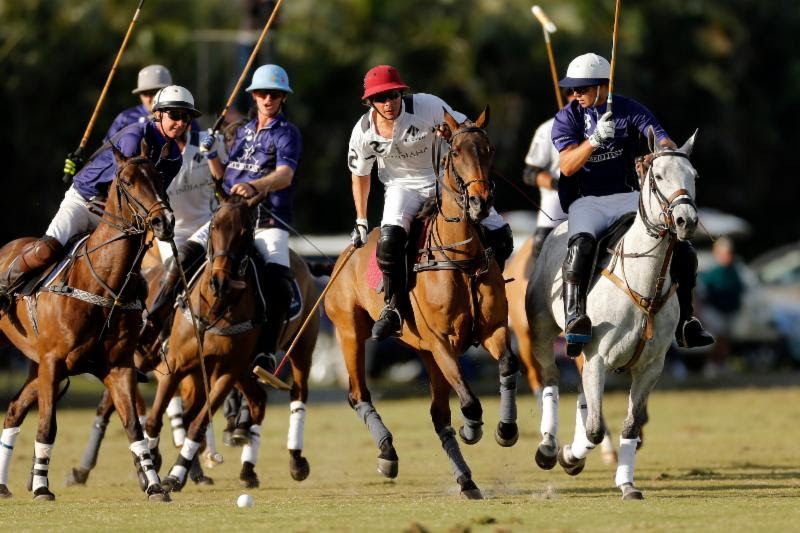 After rain postponed their last game, Mt. Brilliant was eager to play after some time off—and it showed. They came out strong in the first chukker, scoring 4 goals on perfect shooting both from the field and the penalty line. La Indiana, true to form, bounced back as they did in their last game. They won 4 of 5 throw-ins in the second chukker and drove on to goal, scoring 2 field goals and adding 1 penalty goal.

Just as La Indiana was getting back in the game, foul trouble arose in the third and fourth chukkers, allowing Mt. Brilliant to keep their lead. Eight fouls by La Indiana in those two chukkers turned into 3 penalty goals for Jason Crowder, who was a perfect 7/7 from the penalty line on the day, making La Indiana’s fouls even more costly.

La Indiana kept to their plan, creating more scoring chances from the field behind the efforts of Mike Azzaro and Jeff Hall. But when Mt. Brilliant got their chances, they converted them, shooting 7/10 (70%) from the field and 7/7 (100%) from the penalty line. Ultimately it was the extra chances from the line for Mt. Brilliant that secured the victory over La Indiana, setting up an important game against Villa del Lago for a spot in the quarterfinals. 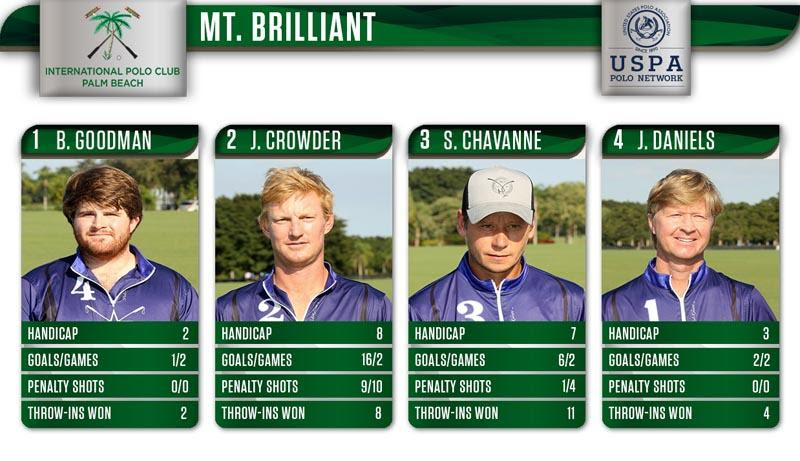 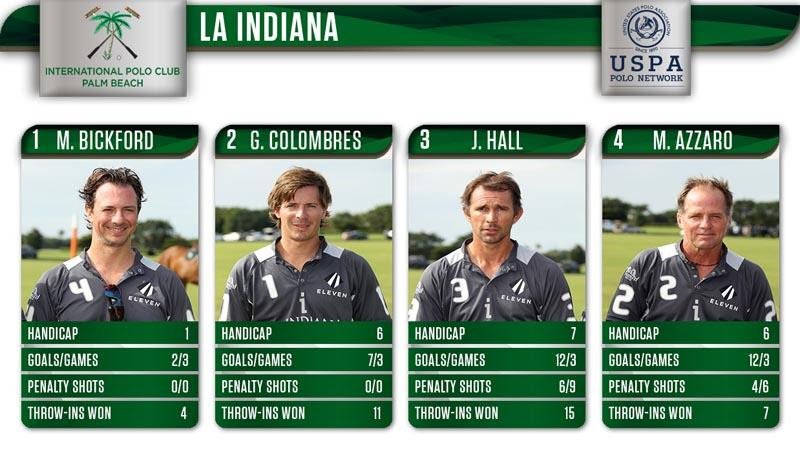 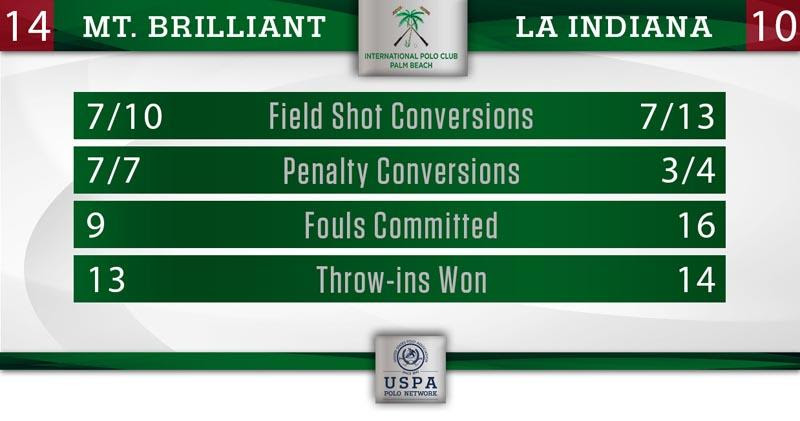 The Joe Barry Memorial continues Thursday with a faceoff between Grand Champions Polo Club and Postage Stamp at noon on field 4, followed by a 3 p.m. contest between Goose Creek and Coca-Cola on Isla Carroll West. The game between Villa del Lago Modere and Mt. Brilliant (postponed in the first chukker Saturday due to rain) has been rescheduled for Friday at 3 p.m.

All games in the tournament are being live streamed on the USPA Polo Network: uspolo.org.